Bible prophecy is accurately fulfilled in this generation

In my personal opinion, the Bible’s prophecy before the return of the last-time Lord is, in the Old Testament, more important than Daniel. God not only revealed the prophet Daniel’s beginning of the “the time of gentile” through the vision seen in King Nebuchadnezzar’s dream, but also the process of the end of the coming Christ Jesus (Daniel 2 Chapter), and even revealed his prophecy about the seventy sevens, about what will happen in the last days and the timetable. (Daniel 9).

Daniel 12: 4 and 9 tell us that God deliberately hid the mystery of the Bible’s eschatological verses and did not unlock them until the end. Even wise Daniel cannot understand (Dan 12: 8). Only Christians who are eagerly looking for Jesus to come and who are in the last ages will understand (Dan 12:10)

Daniel 12: 4 Daniel, hide these words and close the book until the end. There must be many people running (or doing: earnest research), and knowledge will grow. ”

12: 9 He said, “Daniel, just go; for this word has been hidden and closed until the end.

12:10 Many will make themselves pure and white, and be tempered; but the wicked will still do evil, and all wicked will not understand, but only the wise will understand.

After the Second World War, the Holy Spirit opened the veil layer by layer and opened us, so that we began to understand many of the mysteries of prophecy that were hidden in the Bible for thousands of years. In the past thirty years, the rise of Jewish Christians who believe that Jesus is the Messiah has consistently interpreted the Old Testament and the New Testament from the perspective of Hebrew roots, and put forward a lot of teachings about eschatology based on this. A key helps us to unravel many prophetic verses that were once considered esoteric. For example, when we understand that the autumn festivals such as the Horn Festival are related to the Lord ’s return, the Apocalypse is no longer esoteric, and the scenes and content it describes are full of meaning and inspiring the soul! This phenomenon itself is fulfilling the above Daniel Scriptures, proving that we are already in the last days, and the Son of Man is coming back faster and closer!

There are many prophecies that must be fulfilled before the Lord’s return in the Bible, and they are related to Israel. One of the most crucial is the personal prophecy of the Lord Jesus in Luke 21: 29-32 about the re-greening of the fig tree. The fulfillment of this important prophecy in modern history cannot be questioned.

The Lord Jesus wants us to pay attention not only to fig trees, but also to other trees. Jeremiah 24 records the vision of God using two baskets of figs to reveal the prophet Jeremiah’s promise of the destruction of Judah and the future restoration. So there is no doubt that Jesus used the fig tree as a metaphor for Israel’s restoration. So what do other trees mean? When we compared history, we suddenly discovered that it was the foreign states that were established and established in the same generation as Israel’s restoration. Today, more than 100 countries are new countries established after the First World War and after World War II, and belong to the same generation as the restoration of Israel. It is amazing that the prediction of the Lord Jesus was fulfilled so accurately after two thousand years! However, what is even more shocking is that the Lord Jesus said, “This generation has not passed yet,” and He will return! (Matthew 24: 30-34)

Luke 21:29 Jesus also spoke to them in parables: “Look at the fig tree and all kinds of trees; when he sprouts, you see that summer is near when you see it.

21:31 In this way, when you see these things gradually being accomplished, you should know that the kingdom of God is near.

21:32 I tell you the truth, this generation has not passed, all these things will be accomplished.

“This generation” most likely refers to the generation witnessing the resurrection of the fig tree, that is, the last generation before the Lord’s return. We can’t help but ask this crucial question: How long is a generation in the Bible? According to my personal research, there are four possible answers:

If the above explanation is correct, the first two times have passed since the resurrection of this fig tree in Israel, and two possibilities remain. The day of the Lord’s return is really near!

Is the date of the Gentiles full?

After Israel was restored to the world on May 14, 1948, the center stage of the last days began to be gradually prepared, and the prophecies about the last days began to be fulfilled with speed. Less than 20 years after Israel’s resurrection, another important prophecy was fulfilled: Luke 21:24. They would fall under the sword and be taken captive to the nations. Jerusalem will be trampled by the Gentiles until the date of the Gentiles is over. ” 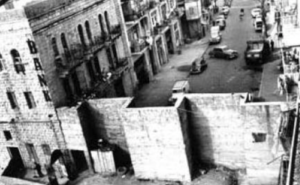 Above is the wall separating Jerusalem from Jaffa Road, which towered over central Jerusalem from 1948 to 1967. At that time, snipers of the Jordanian Legion often attacked the Jewish residents. (Courtesy of the Municipal Archives of Jerusalem) 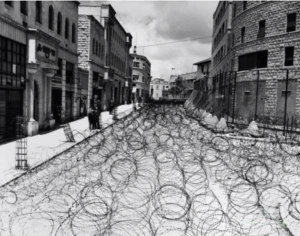 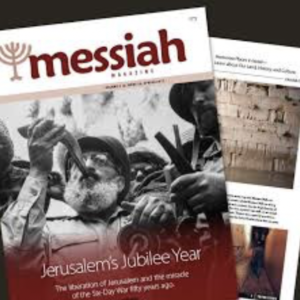 The picture above shows that Israel’s Chief Rabbi Goren, holding a Torah scroll at the western wall of the Temple Hill, sounded the horn to announce that Jerusalem is coming! David asked the Lord to open his eyes to see the wonders of Torah: Psalm 118: 18 Open my eyes, so that I may see the wonders of your law. 19 I am a sojourner on the ground, please don’t hide your order from me. The will of the kingdom of God was in accordance with the provisions of the Torah Central Leap Year. In 1917, the British Empire issued the “Belfort Declaration” to support Jews to return to Palestine and establish the country in the next leap year. The wonderfulness of God’s Torah’s Word fulfills to us “this generation” alive!

The next leap year is 2018, which is also the 70th year of Israel’s founding. God used President Trump to officially recognize Jerusalem as the capital of Israel and quickly move the US embassy to Jerusalem! The value of the Hebrew alphabet is 70, which means “eyes”, and it means “to care”, “return”

With President Trump’s recognition of Jerusalem as Israel’s permanent capital, we see another prophecy accelerating:

Psalm 102 predicts that the city of Jerusalem will be built again and is directly related to the last generations.

Psalm 102: 13 You will rise to show compassion to Zion, for the time has come to pity him, and the date has come. 14Your servant is pleased with his stones, and pity his dust. 15The nations will fear the name of the Lord; all the kings of the world will fear your glory. 16Because the Lord built Zion and appeared in his glory. 17 He hears the prayers of the poor, and does not despise their prayers. 18 This will be remembered for the generation to come, and the created people will praise the Lord in the future.

Verse 18 “the generation to come” was originally אַחֲרֹן (Strong # H314) with the meaning of “last”. It is difficult to find a prophecy as clear as this. The reconstruction of Zion is destined to be “the last generation” (Hebrew original) הַדּ֣וֹר אַחֲר֗וֹ ן

Following is a report by the Jerusalem Post on 6/27/2019 about the European Union’s opposition to Israel’s expansion of residential areas in East Jerusalem. We are witnessing the accelerated expansion of Jerusalem! 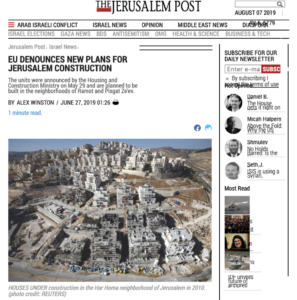 Israel’s withdrawal of the Temple Mount in 1967 has provided “necessary conditions” for the following prophecy:

He resisted the Lord, exalted himself above all that is called God and all worshiped, and even sat in the Temple of God and claimed to be God. 2 Thessalonians 2: 4

Because only after the Temple Mount was returned from Jordan and owned by Israel and became a permanent capital recognized by the United States, Jewish talent could rebuild the temple. Today, this necessary condition is already in place. In conjunction, the antichrist, the “son of perdition” predicted by Paul in the above verse, was “possible to sit in the temple of God and call himself God.” Now, readers are asked to focus on the spiritual telescope step by step with the historical events that have occurred: Israel was restored in 1948, and Jerusalem returned to Israel in 1967. Is the next focus on the reconstruction of the temple? Many Christians who pay attention to the last days, including IHOP founder Mike Bickel, believe that antichrist is already born in the world, maybe 10 years old or adolescent.

Before Jesus returns to establish the millennial kingdom, except that the Antichrist must be revealed first (2 Thessalonians 2: 4), Abraham’s descendants will return from the Gentiles to the land of Israel on a large scale in order to fulfill the prophetic Ezekiel’s prediction:

Ezekiel: 39:28 Because I captive them into the Gentiles, and then gathered them back home, they know that I am the Lord their God; I will no longer leave them alone in the Gentiles.

However, what excites Chinese Christians all over the world is that: The Chinese have played a very important role in the prophecy of the return of the Israeli People’s Congress in the last days!

The following verses describe the return of Israel. God promises that Zion’s children will return quickly (49: 14-17). Although the return of such a large population requires a large amount of material support, God will supply (49: 9-10), and God will lead the way for them (49: 11). Section 12 specifically mentions “Qin Kingdom”, which is China, and it is the only country named in this prediction. Chinese people all over the world, whether they know it or not, may participate in it!

Isa 49: 9 said to the bound man: Come out! Say to the man in darkness: Reveal it! They will have food on the way, and food will be in the high places of all light.

Isa 49:10 Hungry and thirsty, the hot and hot sun will not hurt them; for those who have compassion on them will guide them and lead them to the fountain.

Isa 49:11 I will make my mountains a avenue, and my highways will be elevated.

Isa 49:13 Gosh, cheer! O earth, be happy! Sing, O mountains! For Jehovah has comforted his people, and has compassion on his poor people.

Isa 49:15 Can a woman forget her baby and show no mercy on his son? Even if you forget, I don’t forget you.

Isa 49:16 Behold, I engraved you on my palm; your walls are always before my eyes.

Isa 49:17 Your children will return quickly; those who destroy you and make you waste will all leave you,

Isa 49:18 Lift up your eyes and look around; they all come to you. Jehovah said: I swear by my eternal life: You must wear them as makeup, and wear them as girdles like a bride.

A peculiar sign has occurred in the past 20 years: Chinese Christians have begun to bear an increasing burden on Israel. I believe that more and more Chinese Christians will dedicate their lives and property to the Israelis unconditionally to protect the persecution they are facing. This supernatural love for Israel is only from God. And drive Israel to believe that the Messiah Jesus we believe in and hope for is their Messiah! And this prophecy that will bring about Israel’s great spiritual revival is closely linked to Ezekiel 39:28 in the preceding paragraph:

Ezekiel 38:29 I will no longer hide my face from them, for I have poured out my spirit on the house of Israel. This is what the Lord GOD says. ”

I hope that Chinese Christians from all over the world will rise to understand God’s plan, will, and heart in the last days, and enter into the glorious destiny. In the day of our Lord Jesus Christ’s appearance, we will receive real, eternal, and precious rewards!

Kingdom for Jesus ©All rights reservd.